The fifth episode in The Rosen Family Chronicles, also the first in the "Telly Trilogy". It was originally created as a submission into a YTP contest by walinghammediaisbac, and placed first in said contest. Watch it here.

The episode with Michael mimicking a telly with his hands and wondering what program to put on the telly.

The title screen for "What's This Ear?" comes up, and Brian Rosen, the host walks in and says hello to the audience. Michael Rosen and Older Rosen introduce themselves as the contestants, and Brian begins the game (after waiting for the music to cut off), assuming you know the rules. Of course the rules are simple: a picture of someone's ear is shown, and the contestants take turns guessing who the ear belongs to.

Michael guesses "Babysitter", "Mervin", "Cool Guy", and "George", which are all wrong. Older Rosen guesses "Solomon The Cat", "Zeyde", and "your mother", which are all also wrong. He almost correctly guesses "Michael Rosen", but then adds "age 7 and 3 quarters" at the end and is incorrect as a result. Michael answers "A Two Year Old". Brian asks him to be more specific, and Michael tries guessing "you, David Alexander, yes you, no--" before Brian cuts him off to remind him that he is not in fact David Alexander. Older Rosen incorrectly guesses "my mum", and Michael incorrectly guesses "a boy called Richard". Older Rosen is about to guess "Chocolate Cake", but he is only able to say "Ch--" before the buzzer cuts him off.

Michael reminds him that chocolate cakes don't have ears, and Older Rosen tells him to shut his mouth. Michael then guesses "Toenails" because that totally made more sense. Older Rosen has a laugh about it, then guesses "The Corner Of The Sheet" because that also totally made more sense. Michael is unable to contain his smiling all over his big face. Older Rosen can no longer take the taunting, walks over to him and repeatedly punches him. Michael yells, "Get off me! That's my ear!" Suddenly the crowd begins cheering, as Michael correctly (albeit accidentally) guessed that it was his own ear. Older Rosen says "Hooray!" Michael asks him why he's celebrating if he lost, and Older Rosen just says "I dunno!" The title screen shows again to signify the end of the show.

The episode ends with Michael saying "That program's called... F*** Off." This is a reference to the fact that offscreen the show was cancelled after this episode and later replaced with a better one, a certain "crazy talk show". 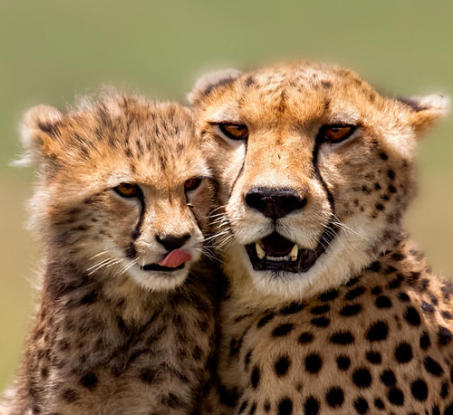